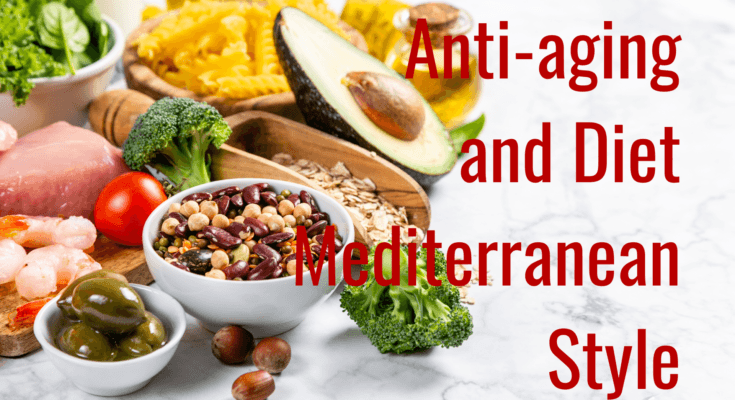 Anti aging and diet, Mediterranean style, is for both old and young.  After all, the younger we start our anti-aging quest, the more we stand to gain.

No matter our age, our goal is not just to live longer but also to live healthier. In other words, we want both to live long and to age well.

There is no scientific definition of “superfood,” the meaning of which is unfortunately obscured by sales hype.  But, according to the Merriam Webster dictionary, a superfood is “a food (such as salmon, broccoli, or blueberries) that is rich in compounds (such as antioxidants, fiber, or fatty acids) considered beneficial to a person’s health.”

We think that is a pretty good working definition.  Yet, beyond that, our selection of preferred anti aging foods follows the advice of noted nutritionist Wendy Bazilian.

This is, for a food to qualify as an anti-aging food, it must be:

Of these criteria, we think “accessibility” is underappreciated. But here’s the thing. No matter how “super” a food might be, if it is hard to get, you are just not going to use it.

And “versatility” and “appeal” go to how well it tastes and how easy it is to use in the kitchen.  For that, we expect the food to be widely used in the culinary world.

Why the focus on the Mediterranean diet?

The Mediterranean diet ranked as #1 in the best diets overall in one study.  And you will see in the tabulation on that site that it is also ranked #1 in the easiest diets to follow category.  This means that it is highly practical. In fact it meets all of Wendy’s criteria above.

But, in our opinion, these specialty diets are suitable only for fast weight loss. They are not easily followed and are not suitable for a practical, sustainable lifestyle.

By contrast, authorities such as the Mayo clinic recommend the Mediterranean diet as a heart healthy eating plan, as does the World Health Organization.  And it is a great weight maintenance plan, once you have reached your desired weight. This is what makes it win out in our thinking of anti aging and diet.

According to Johns Hopkins, the Mediterranean diet has these main heart health benefits:

The Mediterranean diet is sometimes referred to as the “poor man’s diet.” But it is rich in the right kind of nutrition.

So what is the Mediterranean diet?

The Mediterranean diet is a relatively modern term. It was coined in the 1960s as a way of describing and documenting the healthy food habits of people living in Greece, Italy and Crete.

These habits themselves originated in what is known as the “Mediterranean Triad” of grapes, grains, and olives, which were the three most important crops of ancient Mediterranean cultures.

Over time, these staples were supplemented by vegetables, fish and to a lesser extent meats. And, of course, many of the items that are now a feature of the Mediterranean diet, originated elsewhere in the world.

This Harvard Mediterranean diet pyramid illustrates the proportionality of the foods used in the diet. 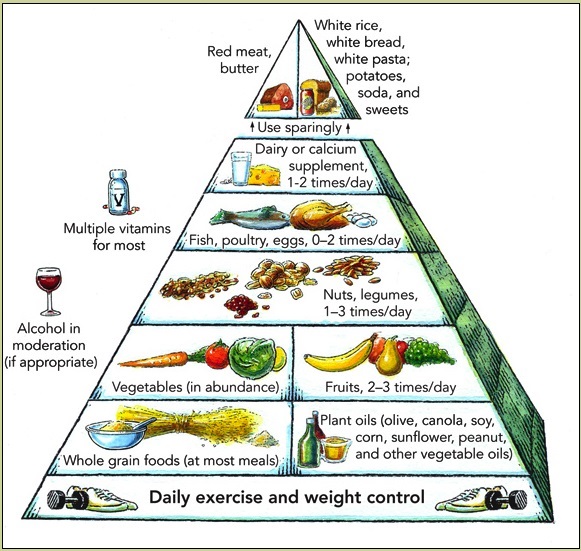 In broad terms, the Mediterranean diet is heavily plant based and revolves, in ascending order of emphasis around:

We have generally grouped these superfoods together but we have singled some of them out for special mention. We’ll work from the bottom of the pyramid up.

Grains are the seeds of cereal plants like rice, wheat, and corn.  And they are part of the original Mediterranean Triad.

A whole-grain is a grain that has been rolled, cracked or crushed but still retains its three parts of bran, endosperm, and germ contained within the kernel.

In a refined grain, the germ and bran has been removed. So it is not nearly as nutritious. 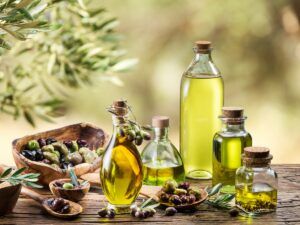 The Mediterranean diet uses plant oils but avoids refined oils. In reality this means restricting yourself to extra virgin olive oil and coconut oil. We believe the pyramid diagram above to be in error. This is because it mentions canola oil, which is a processed oil.

Olive oil is high in monounsaturated fatty acids (MUFAs), which are heart healthy and can lower cholesterol. But it is high in calories, so should be used in moderation.

Nonetheless, it is the preferred replacement for butter margarine or other vegetable oils. It will lose nutritional value when heated, so it is best for cooking at low temperatures.

Use extra virgin olive oil for salads and in soups.

In the context of olive oil “virgin” means that it has been cold-pressed to extract the oil, without the application of heat or chemicals. “Extra” is an indication of high quality. 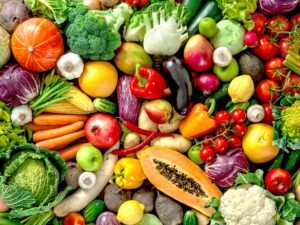 Tubers, such as potatoes, sweet potatoes, and yams should also be included here. You will see potatoes as one of the “use sparingly” items at the top of the pyramid illustration. But we think that is a mistake.

Fruits in the diet include citrus, which grows in abundance in the Mediterranean region, although originating in Southeast Asia. Orange, lemon, grapefruit and tangerine are all rich in vitamin C, which is a known antioxidant.

In addition apricots (high in carotene), apples (high in fiber), figs, grapes, melons, and peaches are all found in areas close to the Mediterranean

Olives are high in powerful oxidants, like vitamin E, and are heart-healthy. Olives are generally very bitter when harvested and need to be cured.

This is done through pickling or fermentation. And fermented olives have excellent probiotic qualities.

Dates have a highly nutritious value and definitely qualify as their own superfood.

Blueberries, while not native to the Mediterranean, are recognized as a superfood, and should be included in a Mediterranean diet. They are an excellent source of vitamin C and much more besides.

The tomato is densely nutritious. It supports a whole range of our bodily systems. While originally from South America, it is now a mainstay of the Mediterranean diet. Although it didn’t get there until the 16th century.

The avocado is its own superfood. It originates from Mexico but is widely used in the Mediterranean diet. 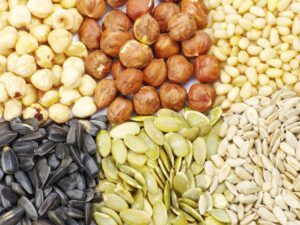 The health benefits of nuts and seeds are many. But in particular, they are low in carbs and high in “good” fats. Plus they are a source of micronutrients, such as vitamin E, selenium and magnesium. 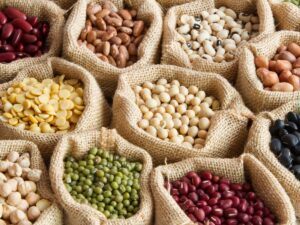 Legumes, also known as pulses, are a type of vegetable that include peas and beans. And the health benefits of legumes are legion.

They are high in protein and dietary fiber and contain micronutrients, such as potassium, folate, magnesium, and phosphorus. 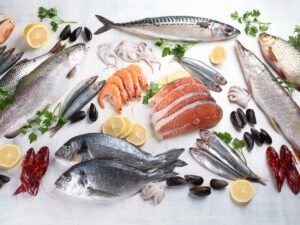 Fish that are native to the Mediterranean are anchovy, sardine, tuna, shrimp, mullet, swordfish, herring, and mackerel. They are replete with omega-3 fatty acids and rich in micronutrient minerals, such as calcium, phosphorus, iron, iodine, zinc, potassium and magnesium.

Of course, we would add salmon to the fish list. Because, while It is not a Mediterranean native, it is high in the heart healthy fat that suits the Mediterranean diet. And it is readily available.

As to flavorful fish dishes, there is little to beat bouillabaisse and cioppino.

Poultry and eggs need no introduction. However, the health benefits of eggs make them their own standalone superfood.

Herbs, spices and the Mediterranean diet 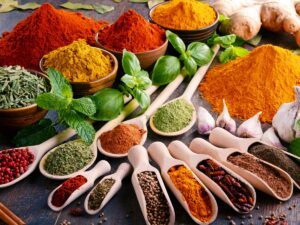 Indeed, one of the most attractive features of the Mediterranean diet is its ability to use spices, along with regular herbs, garlic, onion, chives, and citrus, to transform a dish of humble beans into a gourmet feast.

The list of herbs and spices that can be used in Mediterranean style cooking is very long. Some of these originate in the Mediterranean region, while others come from far away. But in line with our philosophy of making everything accessible, we’ll stick with the most common. These are: 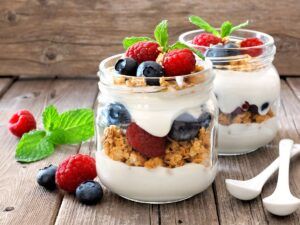 Milk by itself is not a traditional part of the Mediterranean diet. But one should include cheeses like parmesan, feta and mozzarella. And we definitely include  Greek yogurt.

Greek yogurt is full of nutrients, including protein, calcium, B-12, potassium, iodine, and probiotics. Plus it is good for people with lactose intolerance.

In fact, there are studies that suggest dairy should feature more prominently in the Mediterranean diet than it is  traditionally understood.

Red meat and butter appear at the top of the pyramid to be used sparingly. And this is fine but the meat should be lean and unprocessed.

Also at the top of the pyramid to be used sparingly are white rice, white bread, white pasta, potatoes, soda, and sweets. We have already mentioned that including potatoes here was likely a mistake.

However, as for the rest, we think you should avoid them altogether, with the exception of chocolate, as part of the “sweet” category.

Dark chocolate has been elevated to the level of superfood. It contains many different beneficial compounds.

Chocolate also acts as an appetite suppressant because it promotes a feeling of fullness. And it has been found to be a mood enhancer too. It also appears to improve insulin sensitivity.

Choose a chocolate that is low in added sugar and is at least 70% cocoa. 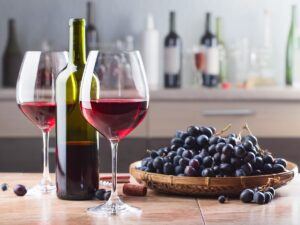 Red wine drinking in moderation (1 – 2 glasses per day), consumed with good food and in the company of family and friends, is part of the Mediterranean diet and way of life, for that matter.

Red wine is preferred to white wine because it is rich in polyphenols, which are similar to antioxidants. Resveratrol is one of the most studied of these polyphenols and now appears in supplement form. Resveratrol has been found to have anti-aging properties.

These polyphenols originate in the skin of the grape, which is mostly discarded in the production of white wine.

Conclusions on anti aging and diet and the Mediterranean diet

Let’s sum up the Mediterranean diet by saying that it really isn’t any kind of a strict, tightly controlled, or fussy diet. It is simply a way of eating that is quite easy to incorporate into one’s lifestyle.

It focuses on whole foods and emphasizes vegetables, fruits, legumes, and whole grains. Its protein source of choice is fish. And it likes its dairy fermented as yogurt. Eggs and poultry are used in moderation.

This diet is known to reduce the risk of heart disease and strokes and is associated with a longer life.

We’ll just round this out by summarizing foods that you should not eat:

Foods to avoid on any diet

Don’t sabotage your dietary efforts by failing to avoid the following foods:

In fact one might almost say that any food that has not been processed is a potential superfood. 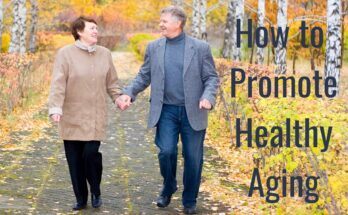 How to Promote Healthy Aging