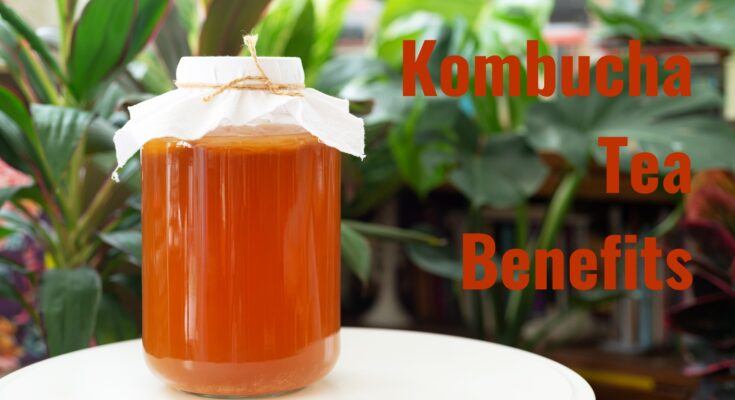 Kombucha tea benefits are widely touted. But how many of the supposed kombucha health benefits are hype or hope. Is kombucha good for you? Short answer – It is.

However, kombucha tea is by no means some kind of magic potion or elixir.

First, we’ll take a brief look at what kombucha tea is. We’ll go into the details of how to make kombucha in another post.

What is kombucha tea?

Kombucha tea is a somewhat sweet, somewhat acidic, effervescent tea that is consumed worldwide. It is made from an infusion of black or green tea leaves by fermentation with sugar of a symbiotic consortium of bacteria and yeasts (SCOBY). 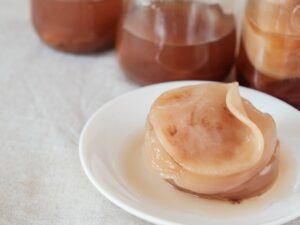 This process is similar to the preservation of cabbage as kimchi or sauerkraut, or how you turn milk into yogurt. You can get kombucha in the stores. But it is quite easy to make kombucha at home.

During the fermentation process, a film forms on top of the product. This is called SCOBY and it can be used in the making of future batches of kombucha.

People have been drinking kombucha for a very long time. There is no “official” written history of kombucha. However, received history, that is word of mouth over time, has its origins in northeast China, where it was used for its energizing and detoxifying effect.

In 414 AD, a physician named Kombu brought the tea to Japan to treat Emperor Inkoyu. So the concoction came to be known as kombucha, cha being the Chinese word for tea.

Eventually, expanding trade routes by sea and land brought kombucha to Russia and western Europe, where its use became common before World War II. As to the science, a study in 1960s Switzerland compared the health benefits of kombucha to those of yogurt.

What does science say about kombucha?

There is no extensive or comprehensive scientific research on kombucha tea benefits as regards health. But, as with so many aspects of alternative health research, there is nothing about kombucha tea that the pharmaceutical industry can patent. So this means that there has been no motivation or impetus to fund such research.

Nonetheless, there is plenty of anecdotal evidence that supports the health benefits of kombucha tea. And there is also a body of medical theory and a growing body of actual research that supports it too. And that is our focus here.

If you do a search for “kombucha tea” on Google Scholar, you will find this very informative piece at the Wiley Online Library. It is a review and round-up of the research on kombucha tea and its benefits on human health.

According to the reports of kombucha tea drinkers and Russian researchers, kombucha health benefits include the following:

This is a long list. So let’s just dig into what researchers say about a few of them. We have included links you can refer to.

Microbiological research has shown that kombucha contains significant health-promoting probiotics. These gut-friendly properties are also found in other fermented foods.

Other probiotic research indicates that these live microorganisms are helpful when dealing with inflammatory bowel disease, irritable bowel syndrome, and diarrhea.

A 2014 study of the effect of kombucha on rats found that it had a beneficial effect on reducing cholesterol levels. This research is potentially indicative but certainly not conclusive that humans can expect the same result.

Nonetheless, other research indicates that probiotics generally have a beneficial effect on cardiovascular health.

Also, there is research indicating that green tea can inhibit cardiovascular disease. And, since kombucha can be made from green tea, this also is indirect support for its heart-friendliness.

Again the idea that kombucha supports liver health can only be inferred, insofar as there are antioxidants in kombucha. Antioxidants reduce liver inflammation.

Antioxidants are definitely beneficial to human health generally because they combat the free radicals that cause disease. And oxidative stress is a well-known causative factor in liver disease.

Besides, this research article concluded that kombucha has a hepatoprotective (liver protecting) effect. However, the article points out that there is no standardized version of kombucha. And this means that no uniform effect can be attributed to it.

Animal studies have found that kombucha tea is helpful in the management of type 2 diabetes. The study concluded that this is suggestive that kombucha is a “potential strong candidate” as a supplement for the prevention and treatment of diabetes.

That said, there is a caveat in that, depending on how it’s prepared, kombucha can be high in sugar and this can cause an increase in blood sugar levels. This is not good for diabetics.

Kombucha contains acetic acid. And this study concluded that this and other components of kombucha, including the SCOBY, showed antibacterial activity.

There is no direct link between kombucha per se and mental health benefits. But kombucha is a probiotic and so it may be helpful.

Cancer is a leading cause of death. It features the uncontrolled growth of cell mutations.

However, it is believed that tea polyphenols, which are present in kombucha, can block these mutations and limit the growth of cancer cells.

There is plenty of hype about what kombucha can do for us. And we cited quite a long list earlier in this post. All of it may or may not be supported by science as it develops.

So, in the meantime, we like to boil down kombucha tea benefits to what is well researched, well documented and seems undeniable.

Kombucha is a probiotic

During the fermentation process healthy bacteria break off from the SCOBY and end up in the brew. These are healthy probiotic bacteria that will thrive in the digestive tract.

Probiotics are the “good bacteria” that help our bodies in several ways. They assist in digestion and keep “bad” bacteria numbers low enough that they can’t affect us. Besides probiotics and a healthy gut have been linked to weight loss.

Oxidation is caused by the free radicals in our system. They damage the body at the cellular level and have many negative effects that contribute to weight gain, illness, and even cancer.

Kombucha is made from a tea that is rich in antioxidants. These compounds are known to help lower cholesterol, regulating blood sugar, and helping burn more calories.

Kombucha is an antibacterial

The “bad” bacteria in our digestive system can lead to constipation, respiratory problems, allergies, high cholesterol, vitamin deficiencies, anemia, and hormone imbalances. If the wall of the gut is weakened, the “bad” bacteria can get released into the bloodstream, thus causing many of these problems.

The acetic acid present in kombucha is produced by the “good” bacteria in the SCOBY during the fermentation process. This acid, which is also found in vinegar, is good for controlling the “bad” bacteria.

Kombucha is a fermented product

Kombucha is one of several other fermented foods, like tempeh, miso, kefir, kimchi, sauerkraut, and yogurt, that are widely consumed for their health benefits.

For example, yogurt is a key component of the highly regarded Mediterranean diet. And we like to use some of these fermented foods in our digestion smoothies.

There are small amounts of vitamins and minerals in Kombucha. These are produced by the action of the yeast breaking down the sugar These include vitamins C, B, B6, and B12.

It seems pretty clear that kombucha is generally beneficial to us. But are there any downsides to it? It’s always good to find this out whenever you put something into your body.

So here are some things to pay attention to: 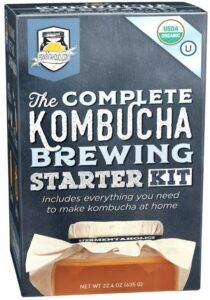 The lesson here is that if you make your own kombucha, you must be scrupulous in maintaining a clean, sterile environment for the process and the equipment used.

And then, of course, you can have too much of a good thing. The Centers for Disease Control recommends no more than four ounces of kombucha up to 3 times per day.

If you are new to kombucha and want to give it a shot, start with a store-bought version. And then, if you like it, go for an online kombucha kit like this one from Amazon. It will have everything you need plus instructions on how to make it.

SCOBY is a biosorbent. This means that it will bind to various contaminants, including heavy metals. And, as we just mentioned, it is known that raw tap water can contain trace amounts of heavy metals like lead.

Commercially made kombucha does not contain alcohol in sufficient amounts for it to be classified as an alcoholic drink. So the amount will be specified as less than 0.05 However, with homebrewed kombucha the alcohol is unmeasured, so the result may be stronger.

So do not let children drink it. Nor should you drink it if you are pregnant or sensitive to alcohol.

While most of the sugar used in brewing kombucha is consumed by the yeast and bacteria during fermentation, some sugar will be left behind. This will be a known quantity in commercially made kombucha but not in home-brewed kombucha.

So if your diet calls for you to limit your sugar intake, then kombucha may not be right for you.

It is hard not to conclude that there are significant benefits to consuming kombucha. And there is a growing body of scientific evidence for this.

Also, one can hardly ignore 2,000 plus years of anecdotal evidence that supports the beneficial use of kombucha across many different peoples.

Plus, aside from the cautions we mentioned above, there is little to suggest that kombucha is actually bad for you. 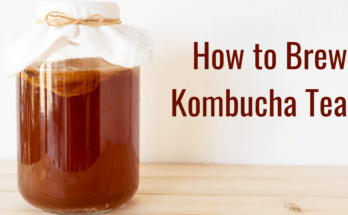 How to Brew Kombucha Tea